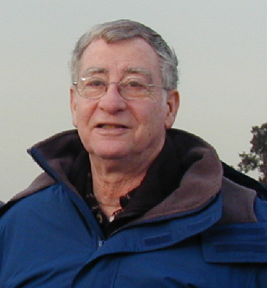 I am now Professor Emeritus at Brandeis.

After 37 years in the in the Brandeis Department of Mathematics, in 1997 I retired to have more time to work in the area of Mathematical Visualization, and more specifically to develop my Macintosh program 3D-Filmstrip (now called 3D-XplorMath). In the Fall of 2004, my wife, Chuu-lian Terng, resigned from Northeastern Univ. to accept a position in the mathematics department at the University of California at Irvine (where she holds the Advance Chair) and we have now moved permanently to Irvine. I am continuing to work on mathematical visualization and in particular I am cooperating with David Eck of Hobart and William Smith College, helping with the design of his Java port of 3D-XplorMath, which will be called VMM---for The Virtual (or Visual) Mathematical Museum. However I have also partially "unretired" and accepted a position as Adjunct Professor of Mathematics at UCI, which means I will be teaching one or two courses per year.

My long term research interests have been in the areas of:

Note: Essentially all my published (and some unpublished) books and papers are available online for download as PDF files at Richard S. Palais' Books and Papers.

and to see the numbers of citations to my papers and a computation of my H-Index, look here: My H-Index

In recent years I have become interested in mathematical visualization, and one of my major ongoing projects is the development and continued improvement of a program called 3D-XplorMath for MacOS X. This is a tool for aiding in the visualization of a wide variety of mathematical objects and processes. Based on what I have learned from my experience in writing this program, I wrote an essay called "The Visualization of Mathematics: Towards a Mathematical Exploratorium" that appeared in the June/July 1999 issue of the Notices of the American Mathematical Society. With the help of Xah Lee, and Luc Benard I have created a Gallery of visualizations, mostly produced using 3D-XplorMath.

I have also recently been thinking about integrable, one-dimensional wave equations---an area that is usually referred to as soliton mathematics. I wrote an expository article for the Bulletin of the AMS (October 1997 issue) called The Symmetries of Solitons. And I was invited to contribute an article called Linear and Nonlinear Waves and Solitons, to The Princeton Companion to Mathematics,( T. Gower Ed., Princeton Univ. Press 2008, 234-239).

Here is a link to my book The Geometrization of Physics,

And here is a link to Critical Point Theory and Submanifold Geometry, Lecture Notes in Mathematics #1353,Springer-Verlag, NY, jointly authored by me and Chuu-lian Terng.

I recently co-authored a book with my son Bob titled:

If you like to see mathematics presented conceptually and if you want to learn what differential equations are really all about and how they get used, we have designed this book for you and we suggest you take a look at it.

Here is an NSF Webpage showing me in VERY exalted company:

My Curriculum Vitae and Bibliography of Published Works.

Do you know about MathOverflow? If not, check it out !